The treatment plant of Castell Mar Campsite becomes a refuge for the population of the glossy ibis. 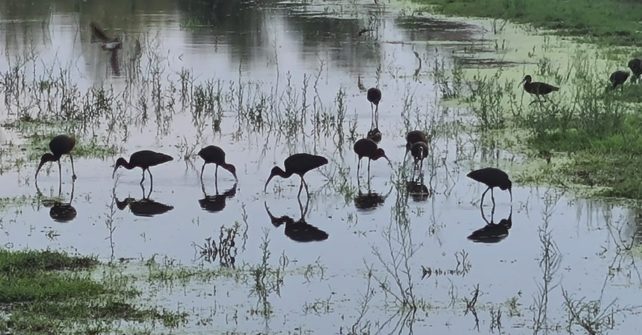 The Glossy Ibis is a very interesting species that became completely extinct in the Iberian Peninsula.  At the beginning of the 80s the Glossy Ibis (Plegadis falcinellus) returned to the Peninsula with its arrival in the Aiguamolls de l’Empordà.  Most of these initial specimens originated from the Danube Delta, the Po and the French Camargue.

Fortunately, today they can also be found in other areas Spain, such as the Ebro Delta or the Doñana National Park.

This Summers extreme weather conditions, in particular the drought, has seen many of the Glossy Ibis’ that were in the Aiguamolls de l’Empordà, turn to the treatment plant of the Castell Mar campsite as the ideal place to feed.  Next to the treatment plant there is a flood zone where they have found refuge throughout the summer which has allowed campers to observe this interesting species very closely.